NORTHDAKOTA.STATERECORDS.ORG IS A PRIVATELY OWNED WEBSITE THAT IS NOT OWNED OR OPERATED BY ANY STATE GOVERNMENT AGENCY.
North Dakota Court Records

The rights of members of the public to inspect and make copies of court records in North Dakota are guaranteed by Section 6, Article XI of the North Dakota Constitution. The section mandated government departments and agencies, courts inclusive, to open every record or document in their custody for public inspection as and when required. Exemptions were made for records sealed or made confidential by law. Although the North Dakota Legislature passed another Open Records Statute, its jurisdiction was not extended to court records.

The North Dakota Supreme Court, following the state’s open government policies, formulated some policies to guide public access to court records. The court’s Administrative Rule 41 revealed that both administrative and case records of the court are accessible to members of the public, either remotely or in person. The Administrative Rule, however, excluded some records from public disclosure. Declarations and affidavits submitted for the issuance of search or arrest warrants are not public. Files relating to sexual assault restraining orders are also confidential. Personal information of jurors, juvenile court proceedings, and documents filed during in-camera examination are also among those barred from public view.

Parties involved in criminal or delinquency cases may also request that some information in case records be concealed. Such requests may be forwarded to the court in writing, with notices served to other parties to the case. Upon careful consideration, the court may approve the request and prevent public access to such case information. Government officials, especially law enforcement, retain access to court records barred from public disclosure to enable them to perform their duties without restraint.

How Do I Find Court Records In North Dakota?

The first step to take when trying to obtain court records in North Dakota is to identify the court case type and the court within which jurisdiction it falls. North Dakota has three permanent court levels, with a temporary fourth, the Court of Appeals, sitting at the Supreme Court’s discretion.

The Municipal Courts in North Dakota have limited jurisdictions and cover cities in which they are located. They hear cases such as traffic violations, infractions, and Class B misdemeanors such as disorderly conduct and theft of cable television services. Interested persons may visit the municipal courthouses and request copies of court records in their custody. Fees charged by the different Municipal Courts vary. For instance, the City of Fargo Municipal Court charges requestors $10 per copy of court records made available to them. Additional copies attract a fee of $10 per case. The Municipal Court in West Fargo also charges $10 for each court record requested. The turnaround period for responding to records requests in West Fargo is usually under 48 hours.

The District Court has exclusive jurisdiction over all criminal and civil cases. Interested persons can obtain court records from the North Dakota District Courts by submitting written requests to the clerk of court at their various locations.

The North Dakota Supreme Court is the court with the highest authority in the state. It reviews decisions made by the lower courts and the state’s administrative agencies. To request court records from the Supreme Court and the Court of Appeal, interested individuals may forward their requests to:

The clerks of the courts are empowered to limit each requestor to a search of ten records daily. This limit may be extended to more case files if such requests do not disrupt the routine court activities. Some record requests may be entirely denied if they are exempt from public disclosure. Court record requests, where the clerk is not sure of public availability can be referred to the court for clarity.

North Dakota courthouses are open to requestors whose intention is only to inspect court records. Inspection must be done in the full glare of the court personnel and inspecting individuals will not be permitted to leave the court premises until such records are safely returned.

Court records from different courts in the state are available online. Members of the public can access these records from anywhere and at any time. Opinions and orders of the Supreme Court are also publicly accessible online.

Considered open to citizens of the United States, public records are available through both traditional, government sources, and through third-party websites and organizations. In many cases, third-party websites make the search easier as they are not limited geographically or by technological limitations. They are considered a good place to start when looking for a specific record or multiple records. In order to gain access to these records, interested parties must typically provide:

While third-party sites offer such services, they are not government sponsored entities, and record availability may vary on these sites when compared to government sources.

How Do North Dakota Courts Work?

The court system in North Dakota has three levels, and each handles various types of cases. A temporary Court of Appeals sits when summoned by the state’s highest court.

North Dakota District Courts have exclusive jurisdictions over most cases, except stated otherwise in the laws. They supervise the Juvenile Courts. These are courts that have jurisdiction over trials involving minors. The courts also receive appeals on cases decided by the Municipal Courts and hear cases involving the state’s administrative boards and agencies. Each of the 53 counties in North Dakota has one District Court, and are divided into eight judicial districts for administrative purposes. These districts and the counties under them are:

North Dakota District Courts judges are elected through nonpartisan elections to serve for six years. At the end of their tenure, they may choose to seek re-election. If a vacancy exists in this court, the Supreme Court has the right to transfer that seat to another district or abolish it. The Supreme Court may also decide to fill that vacant seat. The Governor may appoint a judge from a list of nominees drawn by the Judicial Nominating Committee to fill the vacant position. Otherwise, a special election to fill a vacant Judge’s position will be conducted. If a seat is filled by appointment, the appointed judge only gets to serve for two years before an election is conducted, and the winner will serve the rest of the term.

What Are Civil Court and Small Claims?

Small claims are civil suits where aggrieved persons seek damages for non-criminal offenses committed against them. The damages sought must not exceed a certain limit if they must be tried in court as small claims.

As a division of the District Courts, North Dakota Small Claims Courts handle small claims cases where the damages sought is less than $15,000. Thus, landlord-tenant disputes, contractual disputes, and debts not exceeding $15,000 are tried as small claims in North Dakota. Small claims proceedings are less formal than the usual court cases. Juries or Court Reporters are not required to participate in small claims cases. Hiring an attorney for a small claims dispute is not necessary or economical since the amount sought as damages is small.

Defendants must respond after receiving small claims summons within 20 days of receiving the petition. Parties involved are allowed to bring witnesses, and the Judge makes decisions after hearing both sides. In North Dakota, court rulings on small claims cases are final and not appealable. If a defendant fails to respond to a petition within 20 days, the plaintiff automatically wins the case. Sometimes, defendants may also elect to have the suit discontinued at the Small Claims Court and tried at the District Court where juries and attorneys may be present. If the defendant loses after such transfer to the District Court, payment of fees incurred by the plaintiff in hiring an attorney is included in the judgment awarded against the defendant.

What Are Appeals and Court Limits?

It usually takes between 60 to 90 days after the scheduled date for arguments for the Supreme Court to pass judgments. The decision reached by the court will be sent to all parties involved in the case by email or fax. If the information necessary for that is unavailable, judgments will be dispatched by mail. As the court of last resort, the decisions made by the Supreme Court are final. Dissatisfied parties may apply for rehearing at the same Supreme Court within 14 days after the receipt of the initial judgment. Petitions for rehearing are hardly granted, and when they are, decisions are rarely overturned.

What Are North Dakota Judgment Records?

Judgment records in North Dakota are documents describing the outcome of a lawsuit. Judges typically make judgments based on a jury's verdict or the examination of case facts based on applicable state laws. Court clerks then enter the judgment records into the court docket, thus making it legally binding on the case parties unless an appeal overturns the judgment.

Interested members of the public may obtain copies of North Dakota judgment records per the North Dakota Open Records Act and the Judiciary Administrative Rule. To obtain the judgment record in a case, visit the clerk's office in person during business hours and provide the case number and the names of the parties involved in the case. The court administrative staff will also require payment of applicable fees before processing the request for the judgment records. These fees are payable in cash or with money orders, certified checks, and credit cards.

What are North Dakota Bankruptcy Records?

On June 22, 2020, North Dakota District Court upgraded to the Next Generation (NextGen) of the CM/ECF. Following the upgrade, filers were registered on PACER. Parties can file proof of claim for all chapters of the Bankruptcy Code electronically through the court’s website. The procedure does not require a CM/ECF login and password. Proof of claim form, otherwise known as Official Form 410, is created for the petitioner after the claim information has been filled and submitted.

Bankruptcy records, contracts, writs, North Dakota liens, and related recordings are deemed public record per state law unless restricted by judicial order. Interested members of the public may access these records from their custodians. Still, requestors may be required to provide information to facilitate record search and cover the cost of duplication (where applicable).

How Do I Find My Case Number In North Dakota?

Can You Look Up Court Cases In North Dakota?

North Dakota resumed remote trials for some cases as a way of adapting to the COVID-19 pandemic. Since limiting human contact is the only way of curtailing coronavirus spread, North Dakota courts adopt remote hearings where possible using video conferencing technology. In several administrative orders issued by the Supreme Court Chief Justice, Judges of North Dakota are encouraged to adopt electronic trials as much as possible. One of such orders approved electronic hearing for emergency and merits trials.

What is the North Dakota Supreme Court?

Established by an act of the 1889 Constitution, the North Dakota Supreme Court is the court with the highest authority in the state. It reviews decisions made by lower courts. Five Justices, including the Chief Justice, preside over cases appealed to the Supreme Court. The Justices are elected in nonpartisan elections to serve for ten years. Their elections are staggered so that only one position is vacant and up for election every two years. When death or retirement causes an unexpected vacancy, the governor can appoint a justice to fill the position pending election. The Supreme Court sets up panels to sit as temporary Court of Appeals when burdened with caseloads to ensure quick dispensation of justice. Active justices, active and retired District Court judges, and lawyers constitute such panels. The cases assigned by the Supreme Court are the only ones handled by the temporary Court of Appeals. 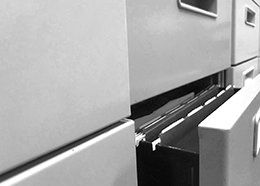 State Archives
Search Includes
Results are based upon available information from state, county and municipal databases, and may not include some or all of the above details.